Not long after Booongo has announced the sequel of one of its most popular games, their all-new slot is finally here. 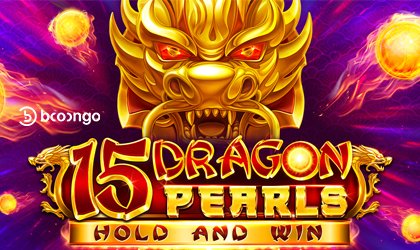 Looking from the perspective of slot lovers, there are some games that every online casino should offer.

Those games are usually legacy among players that enjoy slots. One of such games is the long-awaited is the new 15 Dragon Pearls installment.

Dragon Pearls as the original game is definitely one of the most successful Booongo slots.

Rules are quite simple; players need to collect at least 6 Dragon Pearls symbols and trigger re-spins.

The re-spin feature offers massive winning potential. Each spin that player lands another pearl triggers another re-spin until there are no new pearls added.

Each pearl carries a prize amount that is accumulating with other prizes resulting as one.

Progressive jackpot prizes can also be won in this feature if landed instead of the prize amount.

Booongo has truly done an amazing job with the sequel as the Grand jackpot prize brings x5000 stake win.

Moreover, free games can be triggered by getting 3 scatter symbols.

After 3 bonus symbols are scattering, 6 dragon pearls allow players to re-spin and collect as many prizes possible.

The gameplay went through some large – scale changes as well. The free games bonus is newly added to the game and some of its features are quite original.

The Blue symbol, however, collects values from the entire screen. The Grand jackpot prize carries the biggest win potential here.

Players that land all 15 dragon pearls can consider themselves very lucky and win over 5000 times their stake.

Sounds and visuals are greatly and patiently developed, so the playing experience is very entertaining.

New features only add up to the overall impression of the game making it desirable for new players.

Tournaments in this game will be up so players can compete in their winnings and collect the common prize.

The Hold & Win feature surely is one of the most interesting ways to collect prizes.

Therefore, new games of this developer will also have similar bonuses with new interesting themes.

The slot provider is undoubtedly going in the right direction with these games as their popularity continues to rise with every installment.