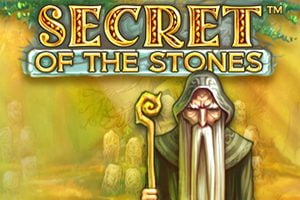 Rating:
Secret of the Stones
The secret of the Stones was developed by NetEnt, a leader in slot video games for over ten years. They've produced popular games such as Mega Fortune and South Side video slots. The Secret of the Stones is an addition to the NetEnt family and has all of the features that make their games so attractive.
Video – Set in a time of druids and Celtic lore, Secret of the Stones has stunning and vivid graphics which make the gameplay all the more enjoyable.
Audio – The music in Secret of the Stones is what can be expected from a slot game played in a mythical setting. There are tinkling bells and chimes which will take the player back in time.
Game Play – There are five reels, and the player can bet up to 25 lines. Like most slots games, matching symbols mean a win. A player will get ten free spins if three scatter symbols appear anywhere on the reels. The free spin feature is probably the most enjoyable part of Secret of the Stones game and a player can collect different bonuses such as; more spins, multipliers, wild symbols, and even up to 2 wild reels. Once the player is in the free spin mode, the reel (real) fun begins. Before spinning, the player selects several stones depending on how many scatter symbols appeared, and under each of these stones are more bonus attributes. All the bonus features are applied before you start on your ten spins which make dreams of high payouts within reach.
Overall – Players are drawn to Secret of the Stones because of the high-quality graphics, the theme of the game, and the fantasy-like music. They stay in the game because of the free spins feature which is somewhat unique and very exciting in this game. However, many players complain of small payouts and find it difficult to hit it big really. The highest symbol is the deer, but that only pays 1250 times the bet for five of a kind. For a twenty-five cent bet, that amounts to a $312.50 win. Not terrible, but not something to write home about. Other symbols include owls, bulls, snakes, and wolves. The most exciting symbols are the tree scatter symbol which will trigger the free spin play and the wild druid symbol. There is no payout for getting the three scatter symbols, but that does activate the free spins round where it is inevitable that the player will win some money.
Players also comment that the game has more wild symbols than the usual slot machine which make winning a frequent occurrence, albeit with low payouts. But, because of the frequency of wild symbols, game play will last longer at the Secret of the Stones game than with other slots. In essence, your money will go further. Players seem to either loathe the game because it takes all their money and vow not to return, or they love the game because, even if they haven't yet hit it big, they believe the potential is there. The excellent graphics and bonus features make Secret of the Stones more exciting than many other games and keep loyal players coming back for more action.
For Secret of the Stones, the return to player (RTP) is 96.7%, and despite the many comments of low payouts, other players have reported close to 1000% returns during the free spin round. Most all players agree that this is a must play machine due to the anticipation and exhilaration generated in those free spin rounds. They also agree that the visuals and animations make the game worth checking out.